I first met Terry in 1979, after my father (an Art Adviser in Yorkshire) was involvevd in commissioning a photographer to work with children and a teacher in a Kirklees school. I was invited to join Terry, together with other teachers, for a day of photography. I was 18 at the time. Terry was about the same age as my father. I’d been interested in photography since the age of 8, when my mother showed me how to take and process, my own black & white photographs.

Terry and I got on well immediately, and it wasn’t long before the teachers had divided into small groups, leaving Terry and me to walk off on our own. My education began almost immediately, and it wasn’t just with photography. Terry was from a very working class background, compared to my own, essentially middle class, one. I had a lot to learn about life and Terry immediately cut through my naivety with a mix of laughter, deep sarcasm, and tremendous wit. I’d leant to grow up, almost apologetic for my views, whereas Terry simply ‘told it as it is’.

A few weeks later, Terry invited me to his home for the weekend, in Harrogate, on Duchy Road. I’d decided to take the train and in those days, mobile phones [for most people] didn’t exist. When I arrived at the station, he was nowhere to be seen and I felt somewhat anxious that he appeared to have forgotten about me. Fortunately, I had his address, so set off walking – eventually managing to find my way to his somewhat imposing house at the end of a gravel drive. I think he’d apparently been to the station, but somehow, we managed to miss each other… I can’t remember now. Anyway, all was soon forgotten and he showed me his photographic darkroom – consisting of a corridor off from the open plan lounge-kitchen area, terminating in a small square room at the end. The white walls were randomly covered in scrawled formulas and photographic ‘recipes’. Terry joked that if he moved house, he might have to take the wall with him, as he never kept paper notes.

Terry quite enjoyed cooking and at the time, we must have been having some meat with something. His wife and kids were away at the time. I’m not sure how many children were with her, but he couldn’t find a meet skewer. I’ll just give Yo a ring, he said, walking to the landline phone. He asked her where the skewers were and then hung up. I then discovered she was in Holland. Now I know you may think nothing of that, but I’d come from a family where even phoning the next town was seen as an expense, back in those days. Here was Terry, treating it like she was down the road.

On that same weekend, we met up with another Terry (I’ll call Terry 2), and Terry drove us in a rather clapped out white Triumph Herald, with dubious brakes, to some moorland where we walked with his Whippet (the family’s dog) to an old half-burried tank, among some trees. A war legacy that you had to be reminded occurred before those tress grew, blocking any way in or out of where the tank had finally come to rest. We took several photos, dropped off Terry 2 somewhere, on the return trip, and returned to Duchy Road. 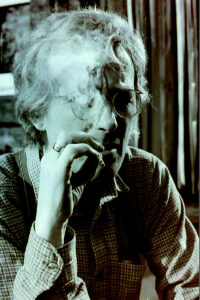 I made several trips to see Terry over the following year, usually driving over in the afternoon and back home again in the evening. I learnt a lot about printing and mixing chemicals for improving the quality of both film and paper processing. We also enjoyed general chats about life, people and places. Terry had a lot of worldly travel experiences to share and also knew a lot of well known people. He’d been friends with John Lennon and then Paul and Mike McCartney and his children were friends with the McCartney tribe. On one occasion I was visiting the Harrogate home, Paul had just sent the girls some T-shirts with ‘McCartney’s Back’ and on the other side: McCartney’s Front’. One time I was there, a couple of his girls were with him and the youngest, Julee (age 6 at the time) came over to me. I smiled. She suddenly said rhetorically: “You’re shy, aren’t you.” Taken aback slightly, I replied: “Why?” “Because you smile a lot.” And then she skipped off upstairs to her sister. I was quite impressed with her accurate observation. Terry told me, at some point, that he often sent them to school with questions he knew the teachers would struggle to know the answers to. He had a wicked sense of humour which belied a seriousness of the intolerance of stupid and shallow people who never questioned anything about their lives. Or in common parlance: he never suffered fools gladly. I think this is why we got on so well. I was often quite philosophical and questioning of the mainstream ‘official line of consciousness’ and wanted to understand my life at deeper, more meaningful levels

In 1982, Terry was back living in Leeds, on the corner of Headingly, near the park. I remember one time, he generously let me take a girlfriend to his house while he went out for a couple of hours, as there was nowhere else for us to meet at the time. About a year later, he visited us where we were now living together. In the course of me attempting to offer him detailed directions, he suddenly laughed and interrupted with: “Listen kid, I’ve found mud huts in the middle of the fucking desert – I’m sure I can find your place!”

Eventually, Terry moved to Skipton. I visited him there maybe only twice. When he moved to Knaresborough, I visited him a few times. I had another friend, at the time, who had also moved to Knaresborough, so for a while I saw them, one after the other. Eventually, my other friend sold up and left, but I continued to visit Terry and on a couple of occasions, took my daughter. Terry liked her because she showed an interest in the things he had around his house. At one point, he said he was going to cut up a rabbit in the basement kitchen and my daughter (possibly age 5 at the time) watched with interest and accepted Terry’s offer of the rabbit’s tail. After a while, having all returned upstairs, she suddenly whispered into my ear. “You ask him.” I replied. She turned to Terry and asked: “Can I have the feet too?” Terry’s face was a picture of delight, as he led her back downstairs to fulfil her request.

As Terry got older, to me he just looked more and more elegant; rugged features of a worldly face and a magnificent head  of grey hair. I’m not sure he’d appreciate the comparison, but very Peter Stringfellow. Sadly, I never saw him in the last 2 years of his life. I tried leaving a couple of messages on his answering machine, but I knew he wasn’t keen on that element of his phone. I also kept looking on the internet for clues as to whether he was still around. For a time, it seemed he was – or at least there were some videos, like the one at the top of this page. In the end, I just assumed I’d upset him in some way and he wasn’t talking to me anymore… but it wasn’t the case. He was dying and only immediate family and perhaps a couple of long-time friends of a similar age, got to see him in the Hospice. It was my ex-wife who eventually saw an internet item announcing his death. I was still in time to respond to his daughter, Kelly and ask that I be permitted to attend the funeral. It took place in a field, on a slightly wild, but mostly sunny, day.

I arrived in good time and parked in a car park next to a large pub. I could see a couple of people in the distant burial field, and thought I was probably in the right place. Thinking people would probably be meeting in the pub, I went inside. After a while of no one arriving, I decided to have something to eat, as there was still time. I was feeling a bit anxious that no one had yet turned up. In the end, I went to talk to the woman in the field. She was smartly dressed in tweeds and sported a deer stalker hat. “How do you know Terry?” I asked – trying to keep the conversation going. “I’m the undertaker.” she replied!