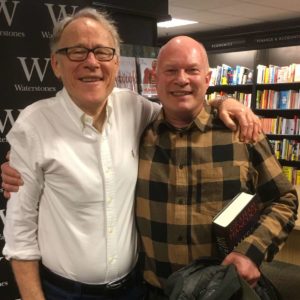 On 2 April 2019, I went to Leeds to attend the launch of ‘America Before: The Key To Earth’s Lost Civilisation‘. It wasn’t the first time I’d met Graham Hancock, world renown author and explorer. Four years previously it was in Bradford, at one of his launch events for ‘Magician’s Of The Gods‘ – the long-awaited sequel to his 1995 book, ‘Fingerprints Of The Gods’, already on my bookshelf. (Among the other books in my collection, I include: Underworld, ‘Keeper of Genesis’ (co-written with Robert Bauval), and ‘The Mars Mystery’ co-written with Robert Bauval and John Grigsby). 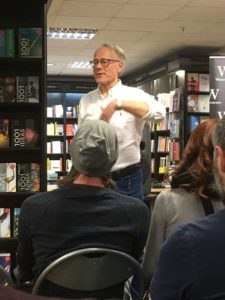 The main thrust of Graham’s work for the past [over twenty] years, has been to explore and then prove, through meticulous research, and hundreds of visits to ancient sites around the globe, that ancient civilisations not only existed on Earth long before we did, but that they inhabited vast cities, comparable with many of our own today, whose people had technically advanced skills and knowledge, rather than being the simple ‘hunter gatherers’ of popular mainstream history. Furthermore, these advanced civilisations, at their peak, were suddenly wiped out by a series of catastrophic world events, from which they never recovered. Instead, humanity effectively ‘started over’ – only this time, with amnesia.

As always, Graham is generous with his time and willingness to sign books, allow personal photographs, and generally engage with everyone in his audience.

And the warning from this revised history? If current humanity does not act to change its ways, we too will surely face a similar cataclysm.

Here are two promotional videos for Graham’s books, ‘Magician’s Of The Gods’ and ‘America before: The Key To Earth’s Lost Civilisation’.