People don’t want to believe in Chemtrails. Despite all the evidence to the contrary, it is far more comforting to believe what our government tells us. 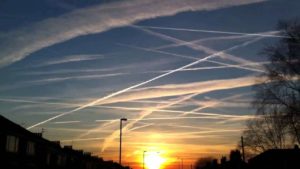 I am an artist, based in West Yorkshire, concerned about our environment. I have campaigned for ending the fluoridation of drinking water and now I am turning my attention to chemtrails from aircraft.

The Truth About Chemtrails

People don’t want to believe in Chemtrails. Despite all the evidence to the contrary, it is far more comforting to believe what our government tells us, and pretend that what we are seeing happening, virtually daily, is merely condensation from aircraft going about their legal business and taking families on holiday or, if zooming somewhat erratically, pointing heavenwards, as if to leave the atmosphere and pop over to Mars, it’s the lads from the RAF playing, as boys will be boys.

Having been lied to since 1973, about fluoride (see, on the web: The Fascism of Fluoridation) I start with chemtrails under no illusions about the spraying of the skies, and the likelihood of its being, like fluoridation, part of the Culling of the Population plan. I have heard there is at least one American Senator who has come out in public to state that, “it is the most humane method”, and there is an Italian Senator who has, for several years, been requesting that chemtrails be declassified. An Italian documentary film about them, names their various constituents: 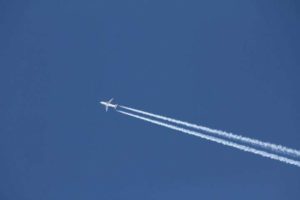 The British Government, however, insists, as it does, in saying fluoride is safe (in contrast to the Lancet, which terms it a neuro toxin) in pretending they do not exist. According to the Web, most modern aircraft engines do not even make condensation trails, never mind filling the skies with spreading and amalgamating feathery crochet-like patterns or puffed-off beads from a string, that cover the blue, and haze over the sun. Sometimes they look more like spiders’ webs or ‘feathering’. 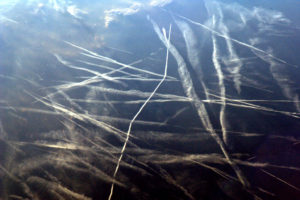 After a day of heavy spraying, the skies on the following day are grey and gloomy, cloudy, looking like rain. So, it may rain, or it may be simply that we are subjected to a light drizzle. Whichever it is, what we are receiving is the precipitation from what the chemtrails deposited in the atmosphere yesterday. Monsanto, God’s gift to farmers, Not! Who patented a seed resistant to aluminium is one of the main corporations involved in dropping aluminium and other metals upon us, although the CIA has its own air force and calls its work ‘geo-engineering’, and admits to doing weather modification with the excuse of fighting against global warming. Whilst in the USA, California, its Breadbasket, fast becomes a desert encouraging the reliance on GM crops and processed foods.

As with fluoridation, under chemtrails the immune system is steadily destroyed and cancer and a host of other complaints may follow.

​There are precedents to chemtrails. It is information in the public domain that during the Cold War, our government secretly authorised the spraying of our population with a variety of concoctions, from Porton Down, with the stated purpose that it was to ascertain just how the poisons would spread if the Russians were to attack us with chemical weapons.